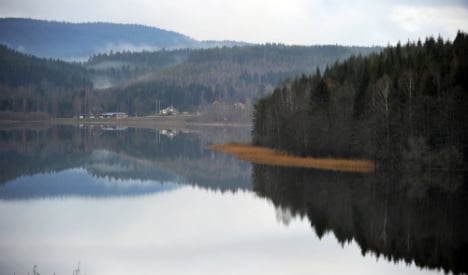 Glafsfjorden near Ludvika. File photo: TT
The wet weather is set to push in from the west on Monday, moving north and east and carrying with it rainfall which threatens to cause flooding in Värmland.
SMHI has issued a class 1 warning in the county as water levels in key lakes continue to rise.
The water in Glafsfjorden outside Arvika  was on Sunday some 46.51 metres feet above sea level, almost a metre above the normal level of 45.79.
Winter is yet to arrive in much of central and eastern parts of Svealand, which includes Stockholm, and the entire province of Götaland in southern Sweden is still, meteorologically at least, experiencing autumn.
Hope remains however that winter will soon arrive carrying with it some snow.
"Next weekend colder air will sweep down across almost the entire country, and we will generally get below freezing. The weather continues to be unstable, which means that we will get some precipitation, which it appears will come in the form of snow," said Lisa Frost, meteorologist at SMHI, to the TT news agency.
Due to the unpredictable weather conditions, SMHI was on Monday unable to forecast with any certainty how much snow was likely to fall and how long it was expected to stay.