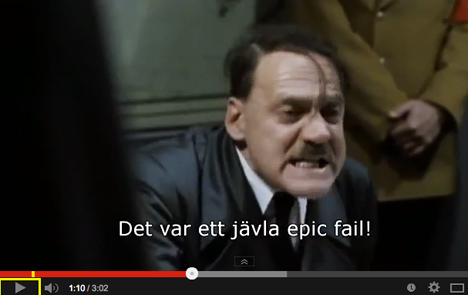 The text from The Daily Currant, the self-entitled "global satirical newspaper of record", reported that 37 people had died on the same day that medical marijuana became legal in the US state of Colorado. It included fabricated quotes from local hospital staff:

As the Huffington Post would later note, Dr. Jack Shepard is a character from the television series Lost.

On Monday, Facebook users noted that the Moderate Party politician in Sweden had shared the article on her Facebook page. She had added the comment "Stupid and sad. My first submitted proposal in the youth wing was called "Crush drugs!". In this matter, I have not changed my judgment at all."

She was criticized for passing on the fabricated news on the popular social media network. Her press secretary later told the Aftonbladet newspaper that the minister had all the time been aware that the article was satirical.

READ ALSO: "Sweden is not mature enough for satire"

The incident quickly sparked a new round of satire. A YouTube user took a clip from the Hitler biopic "The Fall" but added Swedish subtitles to make the Nazi commander furious not only at Ask sharing the marijuana article, but for committing a "PR Poodle" by allegedly pretending she knew it was a satire all along to cover her tracks.

"This is an epic fail," Hitler screams. "Everybody knows you have to be critical of sources on the internet."

The minister was far from alone, however, in spreading the fake article. After it was published, social media grew littered both with horrified statements about the purported deaths, and then came the ensuing backlash from commenters who had understood the original article was ironic.