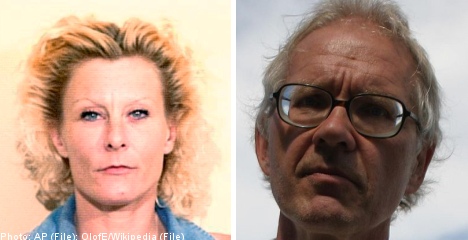 "This case clearly underscores the evolving nature of the terrorist threat we now face in this country," said Zane David Memeger, US attorney for the Eastern District of Pennsylvania.

"The internet has made it easier for those who want to attack the American way of life to identify like-minded individuals to carry out their terroristic plans."

An accomplice of LaRose, Jamie Ramirez, who has also pleaded guilty, is to be sentenced on Wednesday.

According to court documents, LaRose and her conspirators had recruited men on the internet to carry out a "violent jihad" in South Asia and Europe.

She also sought to recruit women on the internet who had passports and the ability to travel freely around Europe.

LaRose also received a direct order to kill Swedish artist Lars Vilks, who had outraged many Muslims by drawing the Prophet Muhammad's head on a dog's body.

LaRose agreed to carry out the murder, believing that her American citizenship and appearance would help her blend in as she attempted the killing.

She later traveled to Europe and tracked Vilks online in an effort to complete the crime but was unsuccessful.

In addition to 10 years in prison, federal judge Petrese Tucker also fined LaRose $2,500, and placed her on five years parole after her release from prison.

She could be released in a little more four years, taking into account good behavior and the years she's already served.

The relatively light sentence may have been due to her cooperation with investigators.

She was taken into custody in October 2009, but her arrest was not made public until March 2010 after the Irish police arrested Muslim suspects accused of plotting to assassinate Vilks.