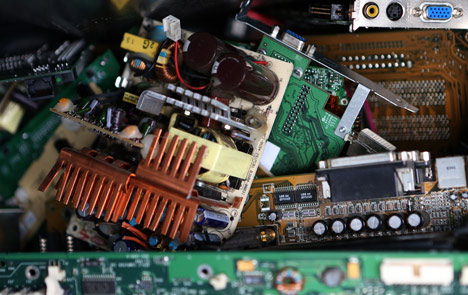 Swedish customs and border officials stopped 771 tonnes of illegal waste last year. Almost half, 293 tonnes, was found in the southern county of Skåne where the authorities say that one in two transports they intercept contains potentially hazardous materials.

Sveriges Television (SVT) reported on Monday that the figures looked roughly the same for spot searches conducted across the country. The presence of illegal waste means the hauling company loses its export license and the consignment cannot leave the country.

Officials said it was difficult to give an estimate of how much illegal waste leaves Sweden annually.

"Given how much we are stopping, obviously it's the tip of the iceberg," Swedish Customs spokesman Martin Johansson told SVT.

The United Nations, which has assembled a task force specifically to deal with the growing e-waste problem, said last year that electronic waste will have increased by a third by 2018. By then, it will weigh as much as eight of the great Egyptian pyramids.

Despite the potential damage to the environment and to workers who disassemble the e-waste, exports from the EU continue. The global police coordinating agency Interpol warned last year that nearly one in three containers leaving the EU that were stopped and searched contained illegal electronic waste.