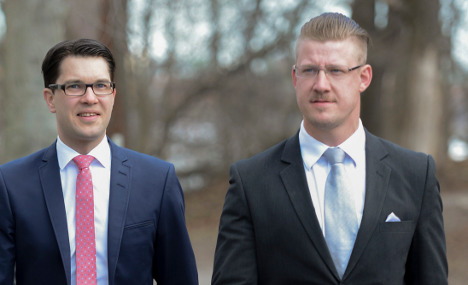 The latest controversy stemming from statements by top brass of the far-right nationalist party started with a Facebook post by Michael Hess, vice chair of the Sweden Democrats in Karlskrona in southern Sweden, in which he wrote that "rape is deeply rooted in Islamic culture".

When asked about Hess' comments, Linus Bylund, press secretary for party leader Jimme Åkesson, said the statement couldn't be construed as racist because it was factual.

"It says in the Koran that rape can be used against women who have been unfaithful. It's a Muslim form of punishment," Bylund told the Blekinge Läns Tidning (BLT) newspaper.

When pressed by BLT about which passage in the Koran condoned rape as a form of punishment, Bylund said he did not know.

"I'm not sure exactly. I don't know exactly what's stated in the Koran, but it's been shown that that's the case."

Jan Hjärpe, a professor of Islamic studies at Lund University, rejected the Sweden Democrat's claim.
"It's not true, it's not in the Koran," he told The Local. "But it's rather common in parlance, you can hear this kind of thing in environments where there are ethnic tensions," he added, pointing to similar occurances in the Balkans during the nineties.
Hjärpe said that rape wasn't a punishment under Sharia law either.
"This is wrong too, it's not in sharia texts at all. There have been some examples in tribal systems, there were cases in Pakistan and Bangladesh for example, where a village council gave a verdict for rape, but it's not Sharia at all."
"I think he just repeated what he heard, or what he read. There is a lot of misinformation and Islamophobia on the internet."
Hjärpe was quick to add that the misconceptions can head both ways, and explaind that in certain Islam enviroments, people selectively quote from the Bible to show "how bad Christians are".
"But this is a special case indeed, where the quotation is based on something completely false."Bylund's statement caused consternation on the political landscape, with Social Affairs Minister Göran Hägglund calling the claim ignorant.

"It comes from ignorance and could signal distancing yourself from people of another religion," Hägglund, who also heads the minority Christian Democrat party, told the TT news agency. "Of course I strictly distance myself from this kind of statement."

The prime minister also said he was critical of the statement and said it was telling of a wider attitude among the Sweden Democrats.

"It's an example of us-versus-them thinking that permeates much of the Sweden Democrats' rhetoric," Fredrik Reinfeldt said.

"Let's see if he become the targets of exclusion now," the prime minister added, in reference to the Sweden Democrat party's efforts to cull outspoken racists from its ranks late last year.

Speaking later with the TT news agency, Bylund claimed he was misquoted by BLT when it came to what the Koran says about rape.

"I said it was naive to believe that this hasn't occurred as a punishment in Muslim countries. I don't care if it's in the Koran," he told TT, adding that he's never read the Koran.

Bylund described Hess's statement as "inappropriate" but maintained that rape is considered by some Muslims as a form of punishment.

"There are examples of people using rape as a form of punishment and claiming it's because they follow sharia," he told TT.

He explained further that Hess' statements on Facebook should not be considered public statements and that they don't amount to racism.

"It's not racism. It's inappropriate, but I don't understand what it has to do with racism. Islam is never going to be a race; it's a value system, an ideology," Bylund told TT.