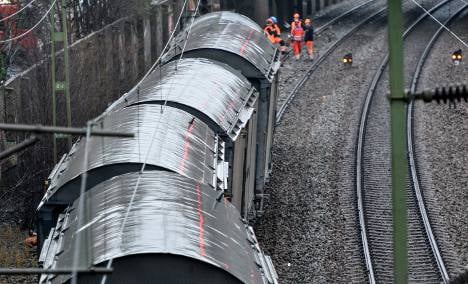 A view of the derailed train cars. Photo: Anders Wiklund/TT

"I just ran over some object here," the driver of an X-2000 passenger train on its way to Stockholm from Copenhagen said in a call to the Swedish Transport Administration (Trafikverket), according to Sveriges Television (SVT).

"There was quite a racket. So I suggest that someone go out there checks what the hell it was."

Following the call, which came in at 11.30pm on Monday night, transit officials decided to send inspectors to the scene, as the train driver called back once more to express concern that the problem may have been with the switch itself.

However, it remains unclear exactly what measures were taken following the call other than alerting service technicians. An hour later, a cargo train passed the same switch and jumped the tracks between Stuvsta and Huddinge, disrupting Tuesday morning rush hour in the Swedish capital and renewing debate about rail maintenance practices.

According to guidelines laid out by the Swedish Transport Agency (Transportstyrelsen), rail traffic "should be stopped as soon as possible" when there is a risk that people, property, or the environment could be injured.

"This sounds like a situation when they should have at least told the next train to pass at a lower speed and with extra care," Claes Elgemyr of the Transport Agency told the TT news agency.

He explained that if the Transport Administration, which falls under the Transport Agency, decided to send workers to inspect the track that likely means the latter knew "something was wrong".

A spokeswoman for the Transport Administration told TT an investigation into the matter is ongoing and was unable to confirm whether the cargo train had been told to pass the switch at a lower speed.

Witnesses said the derailment sounded "like an earthquake" and left several hundred metres of track damaged.