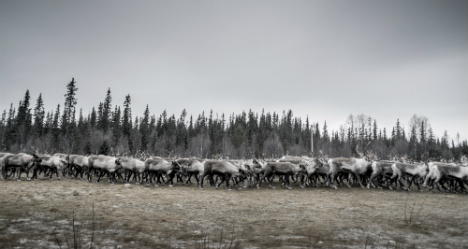 Photo: TT/Svenska Dagbladet
"The situation looks really bad," says Soren Långberg at the Sami Parliament to the TT news agency.
So far, 22 Sami districts requested disaster assistance from the Sami Parliament, which is considered the highest number in seven years and the pile of applications is expected to grow.
The mild winter, with alternating snow, thaw and rain, has created deep ground frost and the impenetrable ice which makes it very hard for the reindeer to get to food, according to several media sources.
The Sami way of life faces a growing number of natural and man-made threats.
The Local reported in December that mining companies are seeking to exploit the resources of northern Sweden, leaving the Samis wondering how much longer they can continue to graze their animals.
The Samis, the only indigenous people in the EU, number roughly 80,000 people who inhabit a huge swathe of land stretching from Norway across Sweden and Finland to Russia.