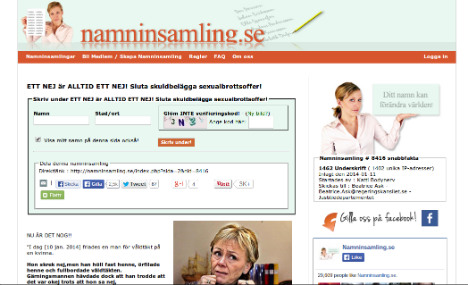 Screenshot: namninsamling.se
"Hey! What do you think about putting together a 'Kärrtorp-massive' demo (peaceful), outside/near parliament say next week where we are in the thousands to demand, better sex crimes legislation? Mutual consent Act NOW!" Swedish journalist Cissi Wallin wrote via Facebook on Friday, referring to the recent anti-racism demo which attracted a crowd of 17,000.
Wallin is the initiator of a planned demonstration which is scheduled for Myntorget in central Stockholm on Saturday January 18th following the ruling at Lund District Court which has left many wondering whether to arm their daughters.
The case in question concerns a 27-year-old man and a woman with whom he had been on a date.
Both the woman and the man said initial physical contact was mutual, but when it switched from fondling to intercourse, the woman changed her mind. The man recognized that the woman protested and admitted that he held his hand over her nose and mouth.
The man said during legal proceedings that he interpreted the woman's resistance as simply being part of a violent sex game, explaining he "recognized it from other girls" with whom he had previously had dominant sex.
The district court concluded that it had been proven that the man had used violence to force the woman into sexual intercourse but that it could not be proven that the man had intended to rape her.
A further protest has been launched to collect names on a petition to be presented to Justice Minister Beatrice Ask calling for end to "blaming the victims".
The petition, entitled "A NO is always a NO" had by Sunday lunchtime been signed by almost a thousand people. The petition calls for reform to legislation and uses the UK mutual consent law as an example to follow.
"Where the responsibility, regardless of whether the attacker was drunk or stupid, always rests with, the attacker."
Critics have warned that the Lund court ruling sets a dangerous precedent where the assailant is given the right to define rape.
"This facilitates further acquittals where one simply explains that the assailant did not know any better than to rape somebody," wrote journalist Hanna Fridén in the Aftonbladet daily.