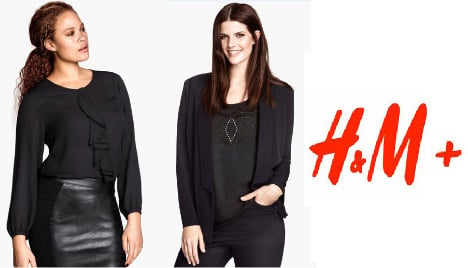 "She fits size (EU) 44 and that is also the size of the clothes she is wearing in our pictures," H&M press contact Håcan Andersson said in a statement, following an upset row with several customers, including former bulimia sufferer and swimmer Emma Igelström. Her concerns about the images topped off an avalanche of criticism towards the Swedish retail giant.

The official H&M spokesman responded it was open to "interpretation" whether the model used in the campaign should be deemed plus sized.

H&M's latest catalogue was sent out to thousands of Swedes last week. Within a few days, the company was under fire from seething shoppers. Multiple models in the plus-size section of the catalogue have been called "normal" and even "skinny", starting a debate about what plus size means – and whether H&M manipulates sizing.

"All of our plus-size models have between size 44 and 54," Andersson said.

Some online sleuthing disproved his statement. Model Sabina Karlsson's international agency, Ford Models, had her size listed online as 40. Her Swedish agent, Mikas, listed her size as 42. Either way, she fell below H&M's own definition of plus size. In single-sizing, size 40 is equivalent to H&M's medium.

Within a few hours, Mikas' website had updated Karlsson's page, listing her size as 42-44.

"[H&M] confirmed that Sabina was photographed in H&M's size 44 clothing and that she fit perfectly in them, and therefore requested that the sizes on the website be coordinated," Mikas founder Mika Kjellberg told the newspaper Expressen.

The explanation did not do much to satisfy the critics, however.

"Of course you can put size 44 clothes on a girl who normally buys a medium," Swedish journalist Frida Boisen wrote in an irate column in the Expressen newspaper, arguing that by such logic any number of smaller sizes could be called plus.

"But say so in that case. Stop lying to your customers."

Emma Igelström, former professional swimmer and author of a book about her battle with bulimia, was one of the catalogue recipients who was shocked and concerned by the images.

"The model looks like a totally normal girl, even skinny. I'm bigger than she is, and I wear a medium at H&M," Igelström told Aftonbladet after spotting another model in the catalogue whose size she also thought was ambiguously referred to.

"H&M needs to take their responsibility for this. They are sponsors to the Swedish Olympics team, but by calling this model plus size they are strengthening the idea that super skinny is the ideal."

It is not the first time in recent months that the fashion chain stands accused of deceptive advertising and of sending questionable body image messages. In November, an H&M spokesperson made headlines by agreeing that some of their models were simply too thin, although then, like now, the company apologized for any offense while failing to specify what would be done to address the issue.

"It's regrettable if we've upset anyone with the pictures," Andersson said. "That was not our intention."