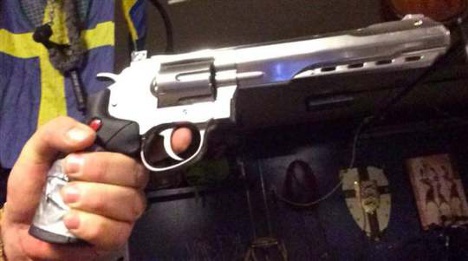 The silver pistol in question. Photo: Facebook
After a 42-year-old man in Skutskär, eastern Sweden, uploaded the incriminating picture to the popular social media site, police were drawn to his home and carried out a raid.
"We heard about this pistol photo on Facebook and decided to raid his house," officer Björn Berglund told the Expressen newspaper.
"There we found suspected stolen goods. There was a coin collection, jewellery, and more, that we believe is stolen."
Police added that an air gun was also found on the premises, although it was later shown that both guns were licensed. Officers, however, were quick to point out that the photo of the weapon was still enough to attract the long arm of the law.
"I don't want to put any kind of judgement over what people put on the internet, but this case led us to the other suspicions," Berglund told the paper.
The man was held on remand for a day on the suspicion of receiving stolen goods.
Police are now investigating whether the suspected stolen goods are connected to any recent burglaries in the area.