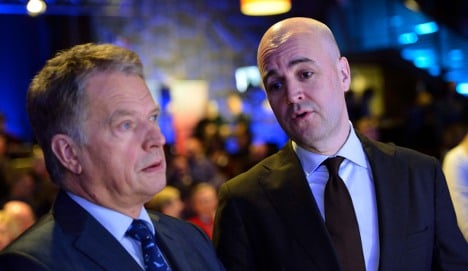 Finnish and Swedish Prime Ministers Sauli Niinistö and Fredrik Reinfeldt in Sälen. Photo: Henrik Montgomery/TT
Twenty-six percent of Swedes say they have a "high" or "quite high" level of confidence in Sweden's defence policy, the annual public survey from the Civil Contingencies Agency (Myndigheten för samhällsskydd och beredskap – MSB) revealed.
This figure is down from 35 percent in 2012 and 40 percent in 2011. Meanwhile, 52 percent of Swedes say they have low or quite low confidence in the policy.
The survey prompted a reaction from Prime Minister Fredrik Reinfeldt, speaking at the annual defence and security conference Folk och Försvar in Sälen, who said that the biggest threat to Sweden is not military in nature, but was more likely to be a cyber or terrorist threat.
He added that under the seven-year rule of the current coalition, the government has increased Sweden's military capabilities, and that there was broad support in the Riksdag for reform.
The Sälen conference is organized annually by Society and Defence (Folk och Försvar), an umbrella organization that aims to stimulate public debate about defence and security policy, and welcomes guests including the Finnish prime minister and the Swedish king.