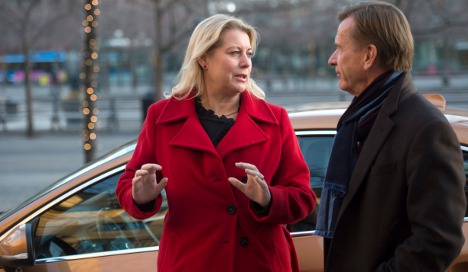 Catharina Elmsäter-Svärd last week signaled she was ready to take on a challenge posed by a columnist at the Dagens Nyheter (DN) newspaper urging her to endure the same ride to work as many of her voters in the Swedish capital.

Rather than enjoying her usual ride to government headquarters in a car chauffeured by agents from Sweden's security police (Säpo), she boarded a commuter train in Nykvarn,south of the capital, which is normally a 30-minute ride from central Stockholm.

"It's important for me to show that even I ride the train and I do it even as a minister," she told Sveriges Television (SVT).

By the time the train reached Södertälje, however, it was stuck in a queue resulting from technical problems with a train further up on the line, a common problem for many Stockholm commuters.

Train delays and derailments have taken up plenty of headline space lately, and Elmsäter-Svärd has not escaped tough questions.

"My responsibility is to try and do something about it," she told DN. "But it's difficult for me to take responsibility as far back as 20 or 30 years."

The upgrades needed to the capital region's rail system are extensive, she explained, and the time and money to deal with them no less extensive. The tracks, the trains, and a host of other factors need to be taken into account. She estimates that a full upgrade will be complete at the earliest in seven years' time.

When the minister and the DN reporter finally reached Stockholm on Monday, her train was 16 minutes behind schedule.

"It's too much, given the length of the journey," Elmsäter-Svärd said. "But, of course it's quicker than taking the car, although for a commuter every minute counts."