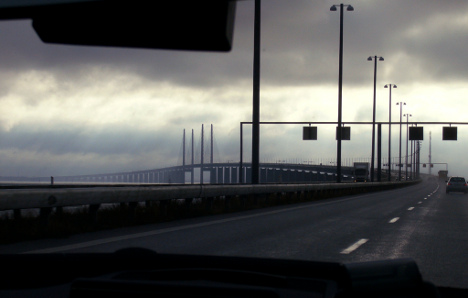 The Öresund bridge to Sweden from the continent. File: Julien Menichini/Flickr

Bulgarian and Romanian migrants contribute more than they cost to Western European economies, which should stand as a lesson to the wary UK which stands to benefit the most from an influx,  a Swedish economist said Tuesday.

Joakim Ruist, a researcher at Gothenburg University, did precise calculations for Sweden, where Bulgarians and Romanians have worked freely since joining the EU in 2007, and estimates for 14 other EU member states.

"My findings clearly show that the fears that are currently expressed in other European countries of unrestricted immigration from Romania and Bulgaria imposing a heavy burden on the welfare state are unfounded," Ruist said in a statement.

The report came one day after EU Employment Commissioner Laszlo Andor said that migrants contribute more than they take in their new countries and tend not to take jobs away from host workers.

In Sweden, one of the EU's most generous countries with its immigrants, and also the one with the largest gap between national and immigrant unemployment figures, Bulgarian or Romanian migrants contribute to the state 30 percent more than they cost, according to the economist.

"This positive result is due to migrants receiving substantially less welfare benefits and being subject to substantially less public spending," Ruist said. "This more than outweighs the fact that they earn less and hence pay less in taxes than the population on average."

The researcher argued that the UK and Ireland are among the countries that benefit most from this immigration, since they a have well-known language and "smaller welfare sectors".

The EU migration issue heated up sharply ahead of January 1st when Bulgarians and Romanians got full rights to free movement in the European Union, sparking fears of a massive influx of migrants living on the state or taking jobs away from locals.

In response to calls for limits, the UK rushed through measures in December restricting access to unemployment handouts for new EU migrants but the feared flood of Romanians and Bulgarians notably failed to materialize.

Sweden joined a long list of critics of the British government's handling of immigration fears, with Swedish Prime Minister Fredrik Reinfeld voicing his concern last year and telling his UK counterpart David Cameron that the fear of welfare abuse had proved unfounded in Sweden.

"We didn't see this big social tourism that everyone warned us about, and it might be wise to share that experience with others," Reinfeldt told Sveriges Radio (SR) earlier last year. Sweden's Social Affairs Minister Göran Hägglund was equally if not more critical.

"I think it's a terrible way to express oneself. I think (Cameron's) speech is very, very unfortunate," Hägglund told SR, specifically, taking issue with how Cameron "pitted us against them" when speaking of migrants.

The new Swedish study used as a sample a fifth of the 10,000 Bulgarians and Romanians who lived in Sweden at the end of 2011, comparing their contributions via taxes with their use of public services, such as social benefits, health care, and education.