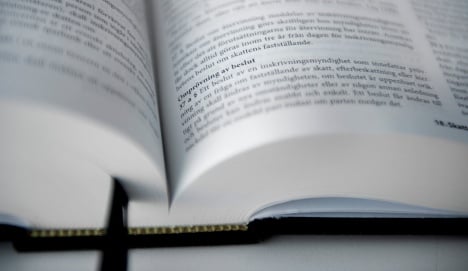 "I knew the moment I took on this case that there would be an outcry if there was a not-guilty verdict," Lund district court judge Ralf G. Larsson wrote in an op-ed published on Tuesday on Sveriges Televison (SVT) debate website SVT Debatt.

Larsson underlined that if the suspect had not intended to rape the woman, he could not be convicted of rape.

"If the thought had not occurred to him, that she did not want to have sex with him, then he didn't have any intention to do what he did," the judge wrote.

He further elaborated that there were parts of the plaintiff's and the suspect's versions of events that testified to the man refraining from certain acts on the insistence of the woman.

Larsson went on to argue that no judge in Sweden should feel pressured by potential media fallout in difficult cases.

"If what is happening right now in mass and social media has the potential to scare less experienced judges, we're on a dangerous path," Larsson wrote.

The ruling has caused outrage among many Swedes, with protests planned for the weekend, most likely in Stockholm, the Skånska Dagbladet newspaper reports.

The alleged rape took place in the man's apartment after the two, who did not know each other previously, met at a restaurant. While both agree that the evening included consensual kissing, the two had different views about what happened when the man initiated intercourse.

"I expressed very clearly that I didn't want to, so there was no way he could misunderstand me," the woman told investigators. She explained, however, that the man became more aggressive as her protests increased, adding that he "seemed to like it".

The woman screamed so much and so loudly that she eventually lost her voice while the man continued. At one point, he covered her nose and mouth so she couldn't breathe and slapped her in the face, Metro reported.

While the woman told investigators she "expressed very clearly" that she didn't want to have sex, the man told the court that he was convinced the woman was into rough sex, saying he received "very clear signals" that she enjoyed what he was doing.

However, the court ruled it had not been proven that the 27-year-old had acted with intent to act against the woman's wishes, a ruling that left many observers seething.

"Hey! What do you think about putting together a 'Kärrtorp-massive' demo (peaceful), outside/near parliament say next week where we are in the thousands to demand better sex crimes legislation? Mutual consent Act NOW!" Swedish journalist Cissi Wallin wrote via Facebook.

According to critics, the Lund court ruling sets a dangerous precedent that allows the assailant the right to define rape.