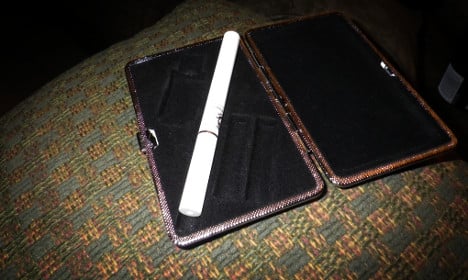 In October 2013, Swedish customs (Tullverket) seized a parcel from China containing liquid nicotine refills (e-juice) for electronic cigarettes, which was on its way to a company in Malmö. The package was confiscated on the grounds that the liquids were classified as medicine, rendering the import of e-juice without a permit illegal.

A month later, a Malmö court ruled that the border officials were wrong to confiscate the package. The ruling said that another court proceeding in Uppsala was currently debating whether or not liquid nicotine should be classified as medicinal, which, the Malmö court said, meant that customs officials had no legal basis to apprehend e-juice.

"It is indisputable that in the present situation these products may be sold legally in Sweden," the verdict read.

In January, Swedish customs decided to try another method, sequestering liquid nicotine imports through "administrative apprehension". Customs have confiscated the products by referring to the rules of the Swedish Medical Products Agency (Läkermedelsverket). That interpretation means an attempt to import such items is not a crime, but that it still cannot be done without a permit.

"No one knows for sure yet what is in these products," Anna Björklund, a lawyer at Tullverket, told newspaper Sydsvenskan. "They need to be compared with other nicotine-containing smoking rehabilitation products, such as patches and inhalers. But until a decision has been made in Uppsala, it is important that we use what tools we have to promote public health.”

Björklund added that the Malmö court decision was regarding an embargo on e-cigarettes, and that "apprehending" the packages is a different legal action. The end result, of course, is the same – the products never arrive at their destination.

Just how strict Swedish customs are with apprehending imports is unclear. Many e-cig users have continued to receive packages containing e-juice, and some customers will continue to order e-juice even if it comes with a legal risk.

"I would rather risk a legal rap than start smoking again, and I'm pretty sure I would (resume smoking) without e-juice. I would guess that 70 to 80 percent of e-cig users would start smoking again without access to e-juice, and awful numbers of people will die unnecessarily,” said Stockholm e-cig user Patrick Nielsen.

A randomized trial study by medical journal The Lancet concluded that e-cigarettes were at least as effective as other methods when it came to quitting smoking , even when using non-nicotine e-cigs. The devices are increasingly popular among those trying to quit smoking, and many tout e-cigs as a much safer alternative as they do not contain tobacco, a key carcinogenic ingredient in normal cigarettes.

E-cigarettes in and of themselves are legal in Sweden, and nicotine-free e-juice is available. However, products containing nicotine are generally classified as medicinal. Two exceptions are normal cigarettes and smokeless tobacco, snus, which are instead regulated by the Tobacco Law (Tobakslagen). A small bottle of liquid nicotine e-juice can contain much higher concentrations of nicotine, which the medical products agency said led to 33 poisonings in 2013, including both children and e-cig users.

“E-cigarettes are generally used to quit smoking, but all such products containing nicotine are regulated by the Swedish Medical Products Agency. Nicotine gum, patches, et cetera. E-cigarettes are no exception,” agency spokesman and nicotine specialist Martin Burman told the TV4 news channel. “But the difference is that those products have been evaluated and approved. E-cigarettes have not.”

Until e-cigarettes and their refills have been studied and approved by the agency, nicotine e-juice cannot be sold in Sweden. However, webshops registered outside of Sweden are not under the jurisdiction of Swedish law, and many e-cig users and suppliers alike purchase e-juice online. These are the packages Tullsverket aims to halt.

Since e-cigs do not contain tobacco, many Swedish smoking laws do not apply to them. For instance, there is no legislation to block e-cigs from being smoked in public buildings or restaurants. Until further studies can determine the effects of “vaping” (as e-cig use is commonly called, referring to the production of vapor instead of smoke), and second-hand vaping, The Swedish Medical Products Agency views this as a problem.

In December 2013, the European parliament voted to include e-cigarettes under the revised and preliminary Tobacco Products Directive, which meant that the cigarettes can be sold in the same ways as tobacco, but with certain restrictions. Refill bottles containing e-juice were also allowed, though in two years’ time the European Commission will report on potential health risks and potentially update the law. In addition, each country in the EU has the right to place its own limits on sales of e-cigarettes, and if three countries choose to ban e-juice refills it will lead to a union-wide ban. Later this month, the European parliament will conduct a final vote on the Tobacco Products Directive.

In the meantime, Swedish customs plan to continue withholding e-juice imports, although spokeswoman Björklund said she suspected that an appeal against their choice of administrative action was not far off.