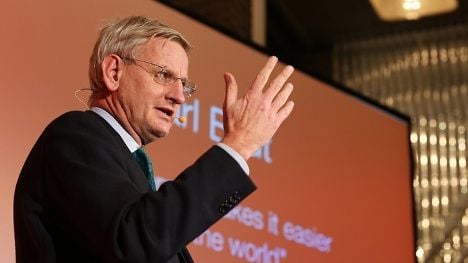 Carl Bildt at his TedX talk. Photo: Foreign Ministry/Flickr
At Thursday's TedX conference in Stockholm, Foreign Minister Carl Bildt took the stage to discuss the potential of digital diplomacy.
"We live, thank god, in a much more open world where the voice of individual people means more, thus public diplomacy is becoming more important," he told the crowd. "It's about getting the pulse of what's happening."
Indeed, the minister (and former prime minister) is no stranger to social media and boasts over 250,000 followers on a Twitter account he updates regularly. He acknowledged that social media is the fastest way to get information about world events, and pointed to Egypt's recent referendum, Ukraine's new "draconian laws", and how Syria marks the world's first social media civil war as examples.
But can social media actually help to resolve the conflict in Syria?
"That's a good question to which I wish I had a good answer," he told The Local after his speech. "I don't think it's necessarily resolved through social media. When it comes to resolution, then classical diplomacy has to come in. But classical diplomacy and conflict resolution can be facilitated by social media.
"Civil war by its nature not only involves two army commanders, it involves groups and societies that are opposed to each other. Reconciliation is about reaching out to all of them. While I don't know the level of connectivity in Syria, I think [social media] can play a role there," Bildt said.
He stressed that social media can also be put to good use by illuminating the often mysterious life of a diplomat, a topic also covered by a 24-hour "diplohack" that took place this week as part of the Stockholm Initiative for Digital Diplomacy (SIDD), and which included the TedX event. The initiative featured a dozen diplomats from around the world working together with leading minds from academia, business, and media to discuss the diplomacy of the future.
But why is it that Bildt is spear-heading the push, besides the fact that he's already shown a strong interest for the digital world?
"I think one should always look at new possibilities that might be there. I've been working with internet issues since the internet started, which is quite some time ago now. Social media and Twitter were obviously going to be important to diplomacy…that is why we started fairly early," he explained.
Bildt can also boast being behind an email in 1994 to then US President Bill Clinton, which became the first-ever electronic message to be sent between two heads of government.
"That was way, way, way back, 20 years ago," he told The Local. "Things have changed quite substantially since then. At that particular time, email was a rather exclusive thing, not many people in Stockholm had it and the White House was hardly able to operate it either. But now it's used by billions of people around the world."
And things continue to change. Bildt himself admitted that in today's world of "hyper-connectivity", people are connected in a way that was never possible before. Digital diplomacy, while still in its early stages, will fundamentally transform public diplomacy, interaction between people, governments and the two together, he argued.
"It might not save the world, that's rather ambitious. But I think it will give us possibilities to work together for a better world, and that is not a small thing in itself."
Oliver Gee
Follow Oliver on Twitter