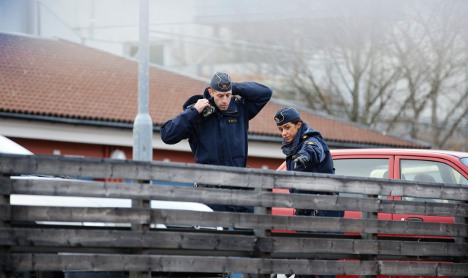 Prosecutor Thomas Eliasson told Sveriges Radio (SR) on Friday that the weapons probably come from the Balkans and their intended recipients were likely members of organized crime gangs in the western port city of Gothenburg.

"Because they've been smuggled here you can count on them being sold to criminal gangs," he told SR.

Västra Götaland police cooperated with colleagues in the western Balkans ahead of the four arrests. Two persons stand to be charged with smuggling the weapons, while one person is suspected of receiving the guns in Gothenburg. The recipient is known to the police from previous criminal investigations.

A fourth person was arrested on suspicion of selling stolen goods. She was arrested in connection to a police raid on Wednesday targeting the suspects.

Gothenburg has been plagued by a string of shootings in recent years, tied to criminal gang turf wars.

"It's been really easy for criminals to get their hands on weapons and they don't hesitate to use them," Erik Nord of the Västra Götaland police told the Dagens Nyheter newspaper (DN) in April last year, when the shooting incidents were tallying up to one a week.