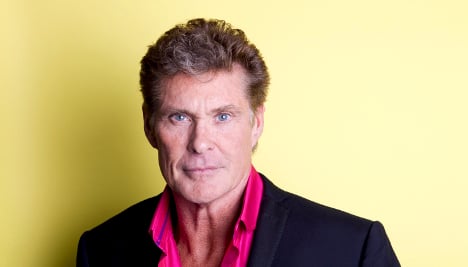 Photo: AP
David I-stood-on-the-crumbling-Berlin-wall Hasselhoff is in Sweden to make what he calls a "talk entertainment show".
Filming started on Friday and is set to run for two weeks, in the lead up to a television programme that will air on February 24th on TV3. But why did Hasselhoff choose Sweden and not Germany? Or Norway? Or Australia?
"I know what he'd say… he'd say why not?" Max Lagerbäck, head of press at MTG TV, told The Local.
"He loves Sweden, and his big goal is to make a variety show like Dean Martin's. He wants it all, everything. And with his tempo and energy, I think he can fit it all in. I don't think he has blood in his veins, it's more like red bull."
Indeed, the 61-year-old has been busy already in the Swedish capital, traipsing across town to pose for pictures and meet the press. He appears to have gone crazy for Sweden, telling the Aftonbladet tabloid that he even wants to make a film while he's here.
The Knightrider star promised a colourful show featuring ladies, pranks, laughs, undercover vignettes, makeovers, and even a "beat The Hoff" section where he challenges Swedes to contests.
But Hasselhoff is more than prepared to lose, with the US star's self-deprecating humour set to be a feature of the show. In fact, the Baywatch star plans to make light of his ignorance by interviewing Swedish celebrities he's never heard of before and quite simply asking them why they're famous.
"Sweden to me is indigenous to a massive entertainment culture from filmmakers to sports guys and even to the beauty of glassblowing. So we're going to get into everything about Sweden and Swedish culture," he told the Expressen newspaper.
For those who can't wait until late February, Hasselhoff will be appearing on rival Scandinavian talk show Skavlan on Friday night.