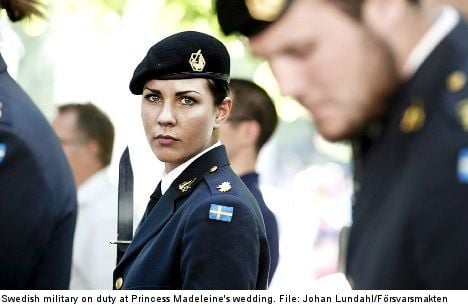 Sweden abolished mandatory military training for all men in 2010, after years of scaling back attendee numbers. The armed forces have since gone through a transition period, with question marks remaining about how to attract a competent work force.

On the eve of the reform, then Defence Minister Sten Tolgfors said the transition would take several years.

"A big reform of such a big state agency takes time. The structure should be in place 2014, but then you have to successively fill up with staff," Tolgfors told Dagens Nyheter (DN) newspaper.

This year's surge in applications has raised hopes of a surge in quality, not just quantity.

"It should likely mean that with double the number of applications, we can also raise the quality of the applicants we accept," Lars Fresker, chairman of the Swedish Union of Officers (Officersförsbundet), told Sveriges Radio (SR) on Monday. "And maybe also find more people who want to stay on."

The supreme commander, Sverker Göranson, has repeatedly said that Sweden's continued participation in high-level missions abroad, such as Isaf in Afghanistan, was key to attracting ambitious staff to the armed forces.