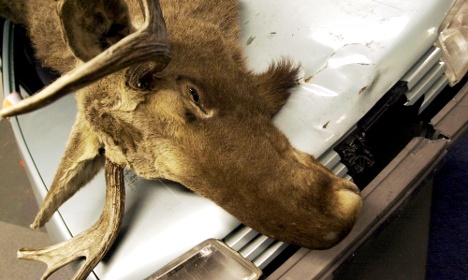 The elk in the picture is not the head mentioned in the article. File photo: Mark Earthy/TT

"Why would someone do such a thing?" the woman told the local Västgöta-Bladet newspaper.

"Think if this means that we can't keep our recycling station."

The woman made the macabre discovery on Sunday afternoon when she was on her way to a recycling station in Tidaholm.

Police later confirmed the find, which turned out to be more than just the head of an elk.

"Someone was going to discard their waste when they saw a pair of ears sticking out from a bag that was stuck in the hole," spokesman Björ Blixter of the Västra Götaland county police told the GT newspaper.

"It's unbelievable," he told Västgöta-Bladet.

"Sometimes we don't get information like this before it's too late and that can have devastating consequences (for recycling operations)."

Police have since cordoned off the area near the recycling station. While police have no suspects, Blixter said the find could constitute some sort of environmental crime.