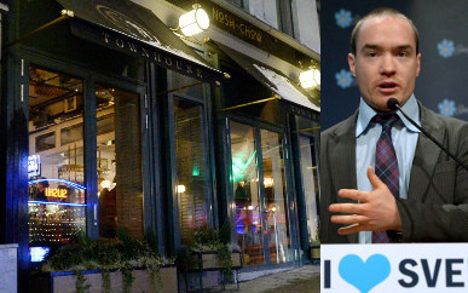 A video published by the Expressen newspaper on the weekend showed bouncers escorting Ekeroth out of the central Stockholm bar Nosh and Chow, as other pub goers whistle and applaud the decision to show the scandal-hit politician the door.

The pub owner said Ekeroth was thrown out after insulting a female guest, which the politician himself has denied. Ekeroth took to his blog to publish his version of events and also condemned staff working on the Stockholm night-life scene for having the same attitude as the country's "politically correct media".

"Sweden Democrats and friends of Sweden Democrats are no longer allowed to go out to a restaurant," Ekeroth wrote on Sunday. "Nobody in my entourage spoke to any woman at this place at all. Not one word."

Instead, Ekeroth said the bouncer specifically told him he was being asked to leave because he was a member of the Sweden Democrats.

Ekeroth's body guards, who are seconded to the politician from the Swedish security police Säpo, decided to file a discrimination complaint. On Monday, however, the Swedish prosecutor said the case would not be subject to a preliminary investigation despite an initial decision to look into the case.

"There are no circumstances that allow us to press on," prosecutor Ronnie Jacobsson told Expressen.

"Political affiliation cannot be grounds for unlawful discrimination according to the penal code," she said

Parliamentarian Ekeroth shot to wider fame last year when Expressen published a video of him picking up an iron bar after a tussle with a passer-by on a night out. The incident prompted a time out from political duties but Ekeroth has since retaken his role as a prominent member of the minority party.