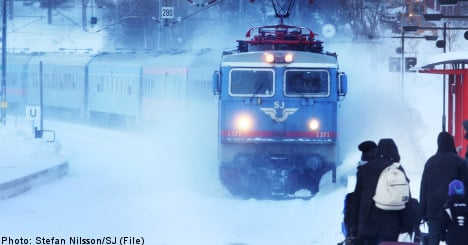 "We're seeing an increased competition, so we have to adapt our costs, which are too high in relation to our income," SJ's managing director Crister Fritzson told the TT news agency.
The majority of the jobs will be cut back in the administration department where 237 people will be culled, mostly in the Stockholm head office but also in Gothenburg, Malmö and Krylbo in eastern Sweden. The culls are expected to save 200 million kronor ($31 million).
The Swedish operator said in a statement that the move was necessary to adapt to customers' changing purchasing behaviour, with many customers heading online to buy tickets. It will also close 17 ticket offices around the country, including one in Copenhagen, explaining that these offices only account for four percent of ticket sales, a figure that is shrinking.
The company's cutbacks are a part of a long term plan to save one billion kronor over three years, savings the company intends to reinvest in future.
The cuts will not affect train traffic, SJ added.
SJ, which employs 4,000 people around the country, said the culls would take effect on May 1st.
"We're beginning negotiations with the union now. We're going to be looking at different packages and offers for those who are leaving. This is, of course, a truly difficult period for SJ and our employees," Fritzson added.
Last week, SJ presented plans to invest in high speed trains, a move which comes with a 3.5 billion kronor price tag.
"This is a comprehensive plan with large investments for strengthening our competitivity and attractiveness," Fritzson said.
The Green Party was unimpressed with the news and went on the attack against the centre-right Alliance government.
"This is the result of the Alliance failing in train policies," Green spokeswoman Åsa Romson said in a statement.
"SJ has made a profit for several years, but has been forced to cut back as the profits have ended up with [Finance Minister] Anders Borg instead of being reinvested in the company."
The party said last week that it wanted to re-nationalize Sweden's rail system and resurrect the monopoly status of SJ.
The news comes following a series of high profile derailments in Stockholm that have raised questions about the quality of maintenance in Sweden's rail system.