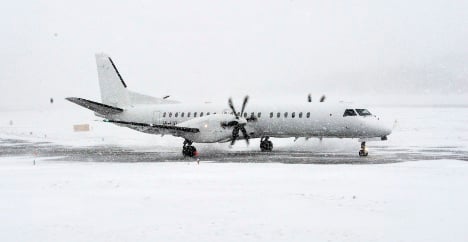 A plane at Bromma airport tackling a snow storm. Photo: Bertil Ericsson/TT
Around 70 flights to and from the airport were redirected to Arlanda airport.
"We have no solution yet. No planes will take off or land from now on and until further notice," Klas Nilsson, spokesperson at Swedish airport operator Swedavia, told the TT news agency on Tuesday afternoon at 4.20 pm, five minutes after the decision was taken to shut down the airport.
The electricity fault was noticed at around 1pm, but airport officials managed to keep traffic flowing by the light of day. When the sun set and the skies darkened around 4pm, officials chose to shutter operations.
Bromma's power was finally restored at 5.45pm, ending the roughly 90 minute shutdown. While flights were able to resume, officials warned passengers to expect long delays as a result of the outage.
"Certainly plans have been redirected to Arlanda," said Nilsson, adding he didn't know what the problem was but that the airport's first priority was getting planes back in the air.
The electrical supplier for the airport, Fortum, denies any responsibility in the outage.
Passengers with flights scheduled to arrive or depart at Bromma are being instructed to contact their airlines for specific information.
Opened in 1936, Bromma was first airport in Europe to have paved runways. With the opening of Arlanda in the early 1960s, Bromma lost most of its commercial traffic until a resurgence in the 1990s following deregulation. Today, Bromma is Sweden's fifth largest airport, serving 11 domestic and seven foreign destinations, with 2.3 million passengers passing through in 2012.