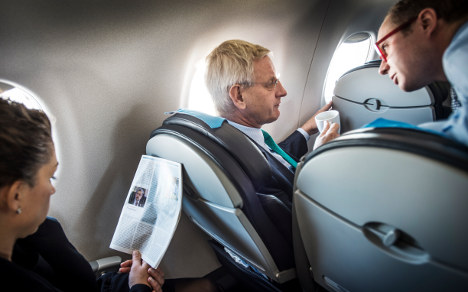 Swedish Foreign Minister Carl Bildt. File photo Yvnne Åsell/TT
The committee was launched by The Centre for International Governance Innovation (CIGI) and the Royal Institute of International Affairs (Chatham House) and will be a two-year initiative focusing on internet governance.
It was launched in Davos at the World Economic Forum and follows in the aftermath of the Edward Snowden espionage revelations.
"In most countries, increased attention is being given to all the issues of net freedom, net security and net governance," Bildt said in a statement. "And they are, in my view, closely related to each other."
"The rapid evolution of the net has been made possible by the open and flexible model by which it has evolved and been governed. But increasingly this is coming under attack. And this is happening as issues of net freedom, net security and net surveillance are increasingly debated. Net freedom is as fundamental as freedom of information and freedom of speech in our societies."
The commission, which will be comprised of 25 experts from fields including policy, academia and civil society, will focus on governance legitimacy and regulation, innovation, online rights, and systemic risk. Independent think tank Chatham House explained that the commission was important because internet governance as it now functions is under threat, stating that "online surveillance has led to a loss of trust".
Work on the commission will begin in May, and will culminate in an official report in two years' time.
Carl Bildt, an avid internet user and regular Tweeter, told The Local last week that social media and digital diplomacy were key tools for peace.