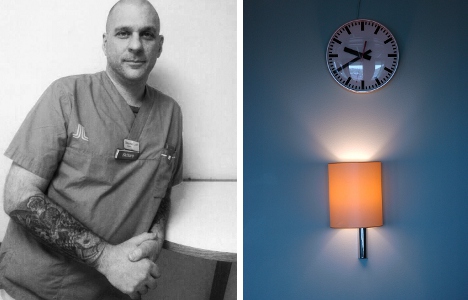 When a psychotic patient locked his hands around the neck of US-born carer Stephen Angelo, it took two of his colleagues to get the patient off him. He believes the high patient-to-staff ratio on the high-risk ward saved his life.

But if it had happened on the normal psychiatric ward?

"I would be dead," Angelo told The Local on Wednesday.

Local health authorities decided around Christmas to close the unit, which has six beds for patients who suffer anything from psychosis to mania and are deemed to be potentially dangerous.

"We are used to having chairs thrown at us, being spat at, and being called every name under the sun. Usually, the patient just needs medicine and time to rest," Angelo said about the patients who are often referred to the unit, with a police escort, from the county emergency room.

The Stockholm County authorities have now, however, decided to close the two Piva units at Danderyd Hospital just north of central Stockholm by March this year – a move that Angelo and his colleagues feel was made without proper consultation.

"She's not set a foot on the ward," he said about top public servant Maria Starrsjö, who on Wednesday refused to comment on the matter when contacted by Sweden's biggest broadsheet Dagens Nyheter (DN). "Instead they refer to some press person who doesn't know the first thing about psychiatric care."

"No one has consulted us about the closure, I found out via SMS from a colleague that the unit would be closed. I've lived in Sweden for 18 years… this country is supposed to be democratic, but they've bulldozed the staff."

Moving the high-risk patients to the ward where psychotic but non-violent patients are treated would be a disaster, the orderly claimed. It would put him, his colleagues, and other patients at risk of violence, and would spread staff resources too thinly.

"The other patients, sometimes they just need to talk for an hour or we go for a walk together, but there will be no time for that," Angelo told The Local.