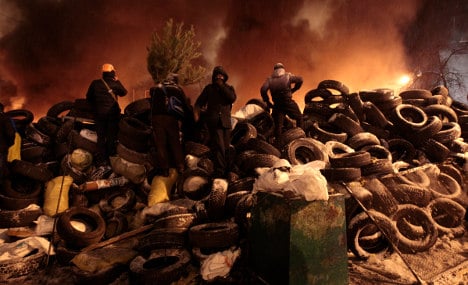 Writing on his blog on Wednesday night after a day spent at the Syrian peace talks in Davos, Carl Bildt shared insight from the negotiation table but also touched upon the violence in Ukraine.

"A large part of my day has also come to concern the dramatic and tragic development in Kiev," Bildt wrote. "There are reports tonight of five deaths."

Known for his candour, Bildt then shared his analysis of who was to blame for the political stalemate.

"The responsibility for the dramatic development is clearly the regime's, and it is [the regime] that must take the necessary steps to avoid an even bigger tragedy."

In Kiev, tussles did continue but with less ferocity.

Started Davos day with interview in @SR_P1morgon on explosive situation in one of largest European countries – Ukraine. More to come. #wef14

Ukrainian protesters and police spent the night between Wednesday and Thursday locked in a tense standoff, the news agency AFP reported. There were sporadic clashes with demonstrators throwing stones and the police responding with stun grenades but there was a relative lull compared with Wednesday's clashes.

Swedish newspaper Dagens Nyheter has access to an Associated Press live feed from the barricades, which shows rows of tires burning in the morning.