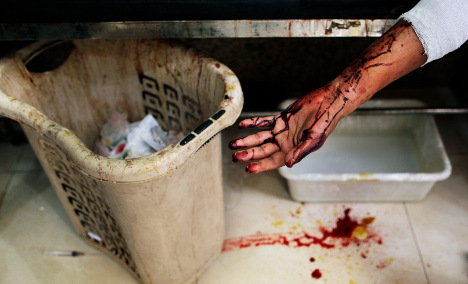 As Foreign Minister Carl Bildt headed south to attend talks, the government  in an official statement reiterated the need for EU countries to show "solidarity" in the refugee arena.

"Sweden has received almost 25,000 asylum seekers from Syria since the conflict began, and we are the biggest recipient in the EU," Bildt's press secretary Erik Zsiga told The Local on Thursday. "We have several times in many different settings reiterated that many of the member states have to take more responsibility to manage this difficult situation."

"We welcomed Sweden's move and at the same time have criticized other EU countries,"  Amnesty Sweden spokeswoman Madelaine Seidlitz told The Local. In reference to Syria, Seidlitz said the actual international and European laws were clear cut. "Most countries do not follow the texts because if they did the majority of Syrian refugees would have the right to permanent protection."

She said Sweden's position had no doubt sparked both admiration and annoyance on the global stage.

"Sweden's stance makes other countries look bad, on the other hand Swedish representatives in Brussels can stand up straight to defend their position," Seidlitz said.

In Brussels, staff working for Swedish MEP Mikael Gustafsson said there had been no negative reaction from other European parliamentarians. His minority Left Party instead criticized the government at home in Sweden for embracing Syrian refugees with open arms on paper, while still putting its clout behind 'Fortress Europe', the heavily enforced borders that make it difficult for refugees to reach Europe and Sweden.

"The walls to the surrounding world actually means that Sweden's decision is somewhat of a paper tiger," Left Party staffer Amanda Ahall told The Local. "The proportion of Syrian refugees that manage to reach Sweden is minimal."