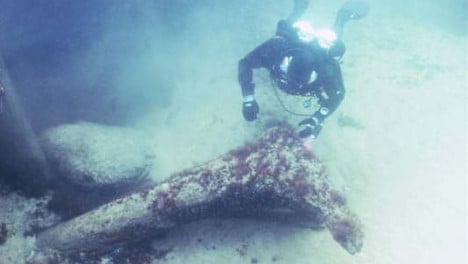 "What we have here is maybe one of the oldest settlements from the first more permanent sites in Scania and in Sweden full stop," project leader and archaeology professor at Södertörn University Björn Nilsson told The Local.

Nilsson's team has been diving in Hanö, a sandy bay off the coast of Skåne County, and has been given the resources by the Swedish National Heritage Board (Riksantikvarieämbetet) needed for a three-year excavation of an area 16 metres below the water's surface.

So far, they've uncovered a number of remnants that are believed to have been discarded in the water by nomadic Swedes in the Stone Age, objects which have been preserved thanks to the lack of oxygen and the abundance of gyttja sediment.

One of the biggest finds has been what Nilsson believes was an abandoned harpoon carving from animal bone, which was discarded into the water along with a host of other objects.

"There's wood and antlers and other implements that were thrown in there," he continued. "Around 11,000 years ago there was a build up in the area, a lagoon or sorts … and all the tree and bone pieces are preserved in it. If the settlement was on dry land we would only have the stone-based things, nothing organic."

Things made of textiles, like rope, can survive where there is a high presence of gyttja, which is sediment rich in organic matter at the bottom of a eutrophic lake. The team has also recovered wood pieces, flint tools, animal horns, and bones of the aurochs, the ancestor of domestic cattle, the last of which died off in the early 1600s. They archaeologists are also keeping a keen eye out for any potential burial sites.

Nilsson admitted that "lousy Swedish tabloids" had blown the story out of the water by labelling the find "Sweden's Atlantis", even though the remnants never belonged to an actual village. The people were all nomadic at the time, he explained, so there was no village. He trumpeted, however, that the finds so far were "world-class" and "one-of-a-kind". He added that was extremely rare to find evidence from the Stone Age so unspoiled.

"What we found here is totally new for us – the whole diving team is really thrilled. They're having the time of their lives down there."

SKÅNE
How Skåne handled its Covid-19 peak this January
Url copied to clipboard!