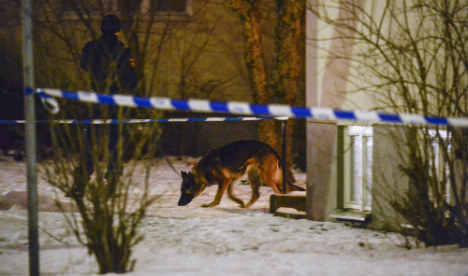 Photo: Pontus Lundahl/TT
"We are looking for at least one perpetrator. Since it is not unlikely that there was an accomplice," said Lars Byström at Stockholm police.
According to media reports police have found footprints in a playground near the scene of the killing as well as traces of a car suspected to have been involved.
The police have also conducted a search of Markovic's residence.
The police were called to Ulvsunda in northwestern Stockholm shortly after 6pm after reports of gunfire. Markovic was found dead in his car with gun shot wounds to his head.
According to witnesses Markovic was shot four times as he arrived at his home in the Bromma area of the city.

Markovic had had his share of run ins with the law, often making headlines in the process. He was sentenced to prison on three separate occasions between 1995 and 2009 following convictions for bribery, tax evasion, weapons law violations, and drugs crimes. He was most recently in the news in December when he was acquitted on charges of conspiring to murder his former business partner following a shooting at Club Privé in May 2013.