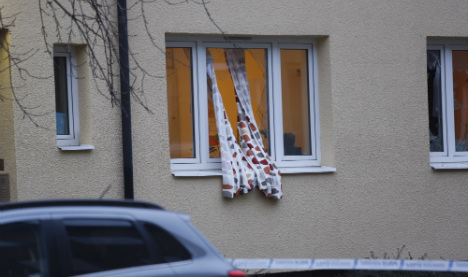 Photo: Drago Prvulovic/TT
Police were called to the apartment on Rasmusgatan in central Malmö after reports of the explosion.
According to police spokeswoman Marie Persson the explosive device was probably some form of hand grenade.
"The man in the family woke up when the window was smashed so he had seen the object come in and bounce in the apartment. Fortunately, he closed the door where the children were sleeping. Then he saw the grenade bounce against the door," said Marie Persson.
The man sustained slight injuries in the apparently completely unprovoked attack.
"He has problems with his eardrums and possibly some damage to the hand," Persson said.
"The family do not understand what happened. There is no threat registered against them. They think someone may have been mistaken."
The family has been evacuated from their home and police have deployed both bomb technicians and forensic scientists at the scene. Several planes of glass were smashed and an area around the apartment has been cordoned off. It was a neighbour who called in and alerted the police, just after 4am.
Police have currently little information with which to go on as they begin the hunt for the perpetrator or perpetrators.
"One person was spotted in connection with the smashed window," Marie Persson told the TT new agency.
A preliminary investigation has been opened into the attempted murder of five people, two adults and three children.