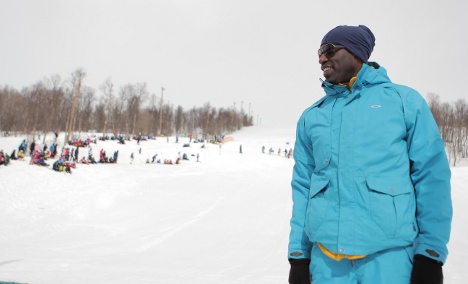 Photo: Big Steve
Big Steve is, you guessed it, rather big. In fact some say he's the biggest thing in Skellefteå besides ice hockey. Towering at 197 centimetres and with a glistening dome on top, the London-native sticks out amongst northern Swedes.
But it's not just his size.
"There's not many black people up in Skellefteå"  he tells The Local with a chuckle. "When I got here there were rumours that the guy from the Green Mile was in town."
Big Steve, also known as Steve Babb, came to Sweden two years ago after finally giving in to the invites from a friend who lived in the northern Swedish town of Skellefteå.
"I thought he was in Switzerland, it was all the same to me," he admits.
Eventually, he made the trip to the small town of just over 30,000 residents. Since then, he fell into making YouTube videos, which is now his profession, much to the amusement of his friends back home.
"They think it's hilarious. I never did anything like this before, I never trolled the internet for videos and was never on YouTube unless to watch the odd video of a cat falling down the stairs," he explains. "But normally I tell people I work in marketing."
Now, the giant boasts almost 70,000 subscribers to his YouTube channel, which posts one new video a week, some of which are nearing the holy grail YouTube stamp of one million viewers (such as this one where he tries Swedish moist snuff, snus).
They include the Brit trying new experiences (from jumping into frozen water to tasting Swedish foods) to meeting locals and learning about their lives and their traditions. The Skellefteå municipality, among others, have financed some of his videos, and his work promoting northern Sweden has seen him doing anything from giving talks to schools to showing up at discotheques.
The career is a major switch from his previous life as the manager of a health club in London. So what are Big Steve's tips for those wanting to start their own Swedish career?
"My advice is that it helps to learn the language, I'm getting there, but slowly. The trouble is, everyone speaks such good English that it becomes embarrassing for me. They correct my English on Facebook – I'm used to using slang, so they often correct me online."
But in real life, the Swedes aren't so confident, he says.
"They're all a bit shy up here, they think because I'm from England I'll laugh when they speak English. They have to think a lot at times, but when they've had a drink they're pretty good," he says.  "And it took me a while to get my head around the word Skellefteå, but someone told me it sounds a bit like 'She left you', so I just go with that."
His other advice is to take education seriously if you're planning a move to Sweden.
"In England, education is secondary, but here it's everything. If you want to move to Sweden to do a certain type of job, you really should have all the right qualifications before you come," he tells The Local.
"But having said that, if I can start a life here, anyone can."