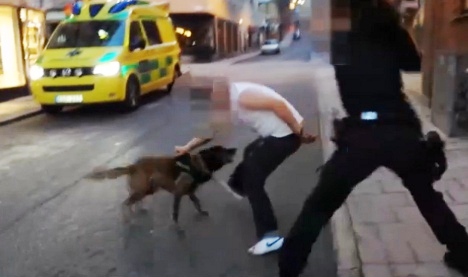 A screengrab from the original video on the DN website shows the altercation.

Viewers flocked to the Stockholm District Court (tingsrätten) as the police woman took her seat. She has been charged with assault and breach of professional conduct.

Members of the public queue to get seats at the district court on Monday, the first day of the assault and breach of conduct trial against a Swedish policewoman. Photo: Janerik Henriksson/TT

An altercation with a drunken man on a central Stockholm street in July lead to the charges, as a passer-by filmed the officer hitting a man repeatedly with her baton after he latched on and would not let go of her police dog's collar.

The man, who fell to and remained on the ground for much of the video, had mumbled that he would bomb the street. When he finally let go of the dog he howled at the police woman "Are you totally stupid?".

The video, published by the Dagens Nyheter newspaper, would go on to make headline news across Sweden.

The police officer has pleaded not guilty to both charges. She sat with her hands clasped on the table in front of her as the trial began on Monday.