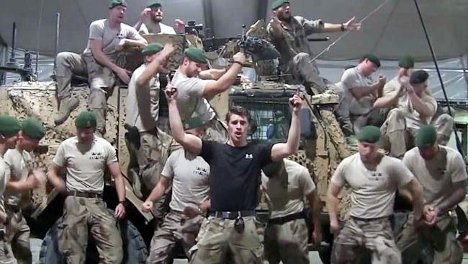 The marines in action. Photo: YouTube (Screenshot)
After the soldiers uploaded the video clip to YouTube, it blew up over the weekend thanks to being posted on news aggregate site Reddit. By Sunday, it had gathered over half a million hits and had been written about in newspapers from the the US to Australia.
In the video, directed by Boris Zelada, a dozen or so Swedish marines lip sync and dance their way through the the classic 1978 rendition of the song as performed in the hit movie Grease, and in near perfect mimicry, except instead of John Travolta and fancy cars, the marines offer army vehicles and camo gear.
As the video continued to spread worldwide, avid viewers and bloggers noticed a number of hidden "Easter eggs" in the clip which showed the marines in dubious sexual poses in the background. "Easter egg" is a common slang term referring to a joke or message intentionally hidden in a computer programme, movie, or website.
Any doubt as to whether Sweden's Armed Forces were misusing their time was put to rest on Sunday, when the spokesperson of the Armed Forces praised the video.
"It's a professional parody that was made during their free time. This doesn't affect the trust in them in a negative way, on the contrary," spokesman Philip Simon told the Dagens Nyheter (DN) newspaper.
Zelada, the director, was surprised the video shot to such lofty YouTube heights.
"We knew it would be big, but not this big," he told the Nyheter24 news site.
"We've got so many nice comments and likes. Even the director of the actual Grease Lightning film has commented on our clip and that's so unbelievably cool for all of us who were part of it."
As of Monday, the original viral clip had been removed from YouTube for reasons that remain unclear, although several other versions have cropped up in its place. Below is one version that has survived, followed by the original for comparison.