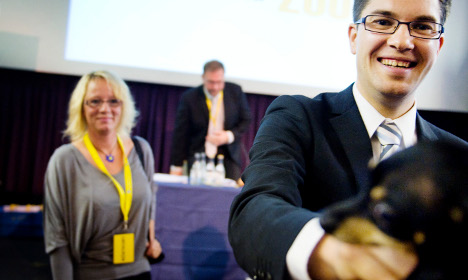 The party's former chief of staff Daniel Assai told the Aftonbladet newspaper on Tuesday that the party deliberately claimed it had a women's association to get 1.4 million kronor ($220,000) in state funding. In reality, however, the group didn't exist at the time of the application.

Assai claimed that he devised the strategy with party leader Jimmie Åkesson and the head of finance at the time, Per Björklund. The party went on to submit a form to access the parliamentary political party support funds and invented the Sweden Democrats Women's Association, erasing the mention of a less formally organized women's "network".

To support its bid for more funding, the party, Assai claimed, forged minutes from a board meeting that was supposed to have taken place in August 2010. The website of the now-existing Women's Association (Sverigedemokratiska kvinnoförbundet), however, states that the members held their first meeting many months later, in May 2011.

Sweden Democrat Women's Association spokeswoman Paula Bieler said the informal network had existed for many years, even before the party entered parliament in 2010, when a decision was made to formalize the network.

"Of course it mattered that there was money to deal with. The thought of creating a women's association popped up at the same time and that is why we changed the name in the application," Bieler told the TT news agency. She added that the money they received was used specifically for a marketing campaign for the women's association during the members' attendance at the political conference Almedalen.

Bieler went on to claim that Assai had been asked to leave the party, and implied that blowing the whistle on the made-up documents was an appropriate mea culpa.

"That he has now said that he forged the minutes comes as a relief to me. If you look at the minutes you quickly see that they're aren't correct," she said. "There are spelling errors almost in every paragraph."

Confusion remained, however, as to whether the party leadership had needed to refer specifically to a women's association in its application for parliamentary funding. The party could have also received the financial support for a loose female network within its existing structure, rather than outline the existence of a specific association. For example, political observers noted, both the ruling Moderate Party and the minority opposition Left Party receive funding earmarked for women's networking directly to its general party structure, rather than to a woman's association.

But if a party does apply for funding directly to one of its subsidiary associations, it must prove that such an association exists.

The chairman of the parliamentary party funding committee (partibidragsnämnden), Torkel Gregow, told the TT news agency on Tuesday that he could not determine whether the Sweden Democrats had breached any rules.

"All the information I have to go on comes from second-hand sources," Gregow said. "I will bring this up with my colleagues later today and will then determine if we will take further action and in that case which action."