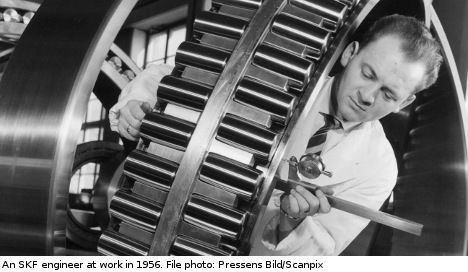 Swedish ball bearing manufacturer SKF announced on Tuesday a sharp profit fall in 2013, a year marked by a multi-million provision to cover a potential fine.

After posting decreasing profit figures for eight months in a row, SKF faced serious losses at the end of last year, due to a three-billion-kronor provision for a potential fine in 2014 for possible infringements of European competition law.

"Profit was heavily impacted in the fourth quarter by the provision for the expected fine from the European Commission," chief executive Tom Johnstone said in a statement.

The losses in the last quarter of 2013 amounted to 2.04 billion kronor, far above the 1.5 billion kronor expected by analysts polled by Dow Jones.

The revenue grew by 10 percent to 16.4 billion kronor in the fourth quarter, beyond the 16.2-billion-kronor forecast by analysts. In 2010, SKF launched a cost-cutting plan which will be completed in 2014, the company said in the second quarter of 2013. SKF, the world's biggest maker of industrial bearings, has laid off 59 percent of its staff since the end of 2010 and has currently 18,500 employees.

In the first quarter of 2014, the firm expects a slightly higher demand than in previous years in Europe, North America and Asia-Pacific, in contrast with a slowdown in Latin America.

In late trading, SKF's shares were up by 5.94 percent at the Stockholm stock exchange, while the market showed a gain of 0.11 percent overall.