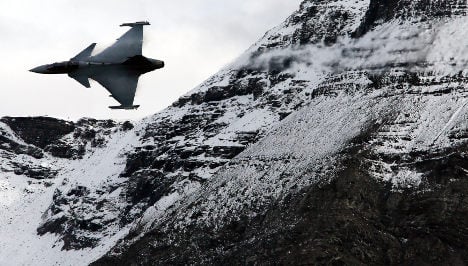 A Jas Gripen flies over the Swiss mountains in 2010. File photo: Pascal Lauener/TT

Switzerland's plan to buy 22 fighter jets from Sweden will be put to the Swiss public in a referendum on May 18, the Alpine country's government announced Wednesday. The decision came after opponents submitted more than 65,000 valid signatures to the authorities, which under the Swiss system of direct democracy is enough to force a referendum.

Polls shows that a majority of voters oppose plans to buy the Swedish Gripen fighters, which would cost the Alpine country 3.13 billion Swiss francs ($3.47 billion). Approved by the government in 2011 and backed by parliament last September, the military deal cannot be blocked as such. But under Switzerland's rules, opponents can contest the law on funding the purchase by tapping an annual 300 million Swiss francs from the military's budget over 10 years.

The coalition campaigning against the deal is steered by the left-leaning Socialists and Greens, plus anti-militarists who last year lost in a referendum in which voters bucked a European trend and kept their conscription army. But the Gripen's adversaries also include economic liberals opposed to the price tag.

The opponents also say the chosen Gripen model exists on paper, as its maker, Sweden's Saab, is still developing it.

The Gripen fighters are meant to replace Switzerland's 54 F-5 Tigers, built by US group Northrop.

"More than three decades old, they do not meet current operational requirements," the air force has said.

A dozen of the Tigers are used both by the Patrouille de Suisse air display unit and on operational missions, most recently during this month's World Economic Forum gathering of political and business leaders and the ongoing Syrian peace talks. The air force of neutral Switzerland also has 32 F/A 18 Super Hornets built by US company McDonnell Douglas, purchased in 1996.

Defending the planned deal, the military notes that with a combined fleet of 54 Gripens and Super Hornets, Switzerland's air power will still be far behind the 300 jets in service in the early 1990s. Supporters of the Gripen deal underline that in exchange for the sale, Saab and its engine supplier are contractually bound to sign business deals with Swiss firms worth 2.5 billion francs over the next decade.