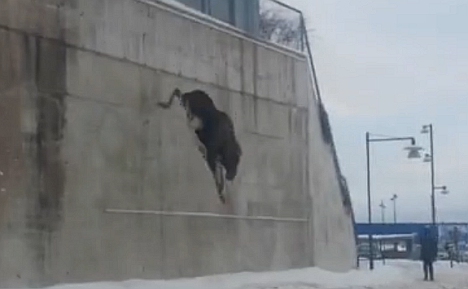 "It was really disturbing," witness Eric Lindvall told The Local.

Lindvall and his friends were in their car chatting outside the Kupolen shopping centre in Borlänge around 3pm when something caught Lindvall's eye.

"I looked up and saw an elk running toward us," he said.

The stressed animal had managed to find its way to the top floor of the mall's car park, apparently unsure about how to get down.

Lindvall and his friends thought the elk would manage to go down some stairs, and promptly started their car to drive round the other side of the car park in hopes of seeing the elk again and calling police.

But rather than taking the stairs, the elk instead hurled itself over a fence at the edge of the eight-metre high building, leaving Lindvall and his friends in shock.

"I couldn't believe my eyes," he said of what turned out to be the elk's fatal leap.

"I had my phone out because I thought it would be cool to film the elk, but I had no idea it would end up like this."

RELATED: The elk after the fall (WARNING: GRAPHIC CONTENT)

After the elk's improbable jump, Lindvall got out of the car and put a jacket over its head in hopes of calming the animal down.

"It tried to get up and walk, but fell down after a few steps since three of its legs were broken," he said. "I can say that I saw the elk take its last breath."

Police eventually arrived on the scene to redirect traffic and confirm that the elk had died.

"I've never heard of anything like this ever happening before around here," Lindvall told The Local when asked about past elk sightings at the mall. "It was quite gruesome."