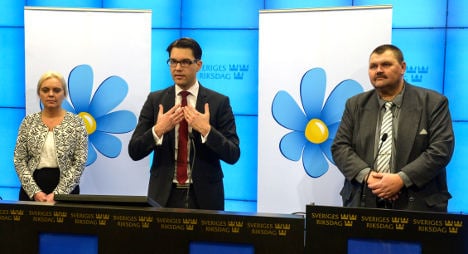 Earlier this week, the Sweden Democrats presented their candidates for the May 2014 European parliamentary elections, and to put it bluntly, it's fair to ask why they even bothered. As a party that has nationalism, protectionism, social conservatism, and anti-immigration as their core ideas, putting a lot of effort into a body based on international cooperation seems to be a futile effort. Especially since the party's anti-EU policy was the major reason why a teenage Jimmie Åkesson, now the party's leader, chose to join the Sweden Democrats in the first place.

At least that's what he tells people today.

If elected to the European Parliament, the Sweden Democrats will probably try to do as little as possible. Just look at the political record – or lack thereof – of the party's top two MEP candidates. One unabashedly admitted a lack of knowledge about the EU, while the other was previously in national media after she chose to take a time out from politics due to "stress and threats".

Ironically, however, putting forward two candidates with a decided dearth of political (not to mention European) experience might work to the Sweden Democrats' advantage.

At the press conference where the two candidates where presented to the national media, Åkesson stated that the party's aim was to get core voters out to the polls. As a result, the party picked candidates that ordinary SD-voters could relate to.

Of course, this could turn out to be a risky strategy as European elections are far more international in character than Riksdag elections, with thus generally have a far lower voter turnout. Furthermore, there are already plenty of options for those looking to lodge anti-EU "protest votes", including the Pirate Party, which has already made a name for itself in the European Parliament as a critic of the EU's federalist tendencies. For those who resent the EU because they simply want Swedish legislation to be decided in Stockholm, rather than Brussels, there is also the Left Party, previously represented in Brussels by current party leader Jonas Sjöstedt.

So why then do the anti-EU Sweden Democrats care about the European Parliamentary elections? The simple answer is money and influence: if you are elected to represent your country as an MEP you receive financial support for staff and travel expenses. Ultimately, these funds can be used to strengthen the Sweden Democrats back in Sweden, and the party is always keen on finding financial support for the national party.

Many anti-EU parties across Europe follow the same reasoning. Even though they don't recognize the EU as a legitimate political force, they are often keen on accepting EU funding for their parties. The end justifies the means.

As the Sweden Democrats' chances for exerting any real influence in the European Parliament seem slim, it appears their primary motive is a financial one. As a profoundly nationalist party, they also probably don’t care that much about what happens in the European arena, which brings us to looking at what having an MEP would mean for the party's fortunes back in Sweden.

Since the 1990s, there have been several fringe parties in Sweden and some of them have been represented in the European Parliament without being represented in the Riksdag. With their representation in the Riksdag firmly established, if the Sweden Democrats also gain one or two seats in Brussels/Strasbourg, it would be the ultimate proof that they are here to stay. It would be more of a boost for their self-confidence than any form of EU political influence, as it would help them attract support in the future.

In the 1980s, the speaker of the US House of Representatives, Tip O'Neill, said that "all politics is local", a mantra that is true for Sweden, for the elections to the European Parliament, and for the Sweden Democrats. They are fielding traditional candidates in order to boost their standing nationally. If they succeed, the Sweden Democrats will gain access to substantial amounts of funding for their future election campaigns.

It remains to be seen, however, if the presence of other EU-critical parties with representation in Brussels and a substantial political record to boot, will scuttle the Sweden Democrats' European strategy.