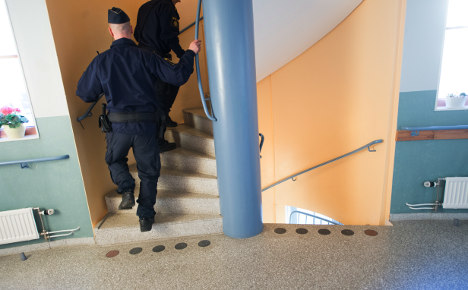 "I have never visited a psychologist or a psychiatrist my entire life, but after this I might well have to," the woman, who wanted to remain anonymous, told the local Barometern newspaper about being sectioned by mistake.

She was at home in her apartment on January 2nd when there was a knock on the door. "Erika" had just returned home from work and was in the shower, but got out to open. To her surprise, two police officers stood outside. They insisted that she come with them to the psychiatric emergency room straight away.

"I said it had to be a mistake. They were very kind, but they said they had no more information and that I was coming with them," Erika told Barometern.

Having relented, the woman ended up at the local hospital in Kalmar, southern Sweden, and eventually spoke with a nurse. It turned out that one of her neighbours had called the emergency services and talked of suicide, which meant the police were dispatched to fetch the at-risk person. But instead they had knocked on Erika's door.

The revelation that there had been a mix-up caused "utter chaos", the woman said. She had to stay and speak with psychologist before being allowed to go home.

Ready to put the bizarre incident behind her, the woman then received an invoice for 400 kronor ($60) for her forced visit to the clinic.

A hospital spokesperson said they were embarrassed for the mix-up and the invoice and apologized unreservedly.

The woman, meanwhile, said that while she wanted to move on, her family's experience of war in their country of origin made it difficult to shake the experience of being picked up by the police for no reason.

"Twenty years ago my father was picked up by police the same way and taken to a concentration camp," she told Barometern.