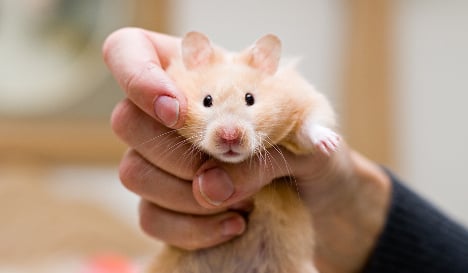 Börje burst onto the Swedish news scene last Tuesday when an odd wire story came across the TT news agency feed that supplies news to just about every news outlet in Sweden.

Readers learned that owner Bo-Göran Sunesson had tried to get rid of little Börje by turning him into a public record (allmän handling). Authorities refused, but laughed about the matter, and Sweden laughed along with them over the cute little unwanted creature.

Soon after the item hit the TT wires, Börje's plight was plastered on news websites across the country. (After considering the item at The Local — how often does one get to write a story about a hamster — we ultimately decided to pass as the details were a bit, er, fuzzy).

As it turns out, Börje has one even more remarkable trait than being a Swedish media darling:

For that matter, neither does owner Bo-Göran. They are both figments of the imagination of 21-year-old journalism student Dan Eliasson. Curiosity led Eliasson to employ Börje in a little experiment to learn more about public records in Sweden. But instead, he ended up learning more about the behaviour of Swedish media.

“In Sweden we have this principle that some things are public, and these public records are very important for a journalist,” Eliasson tells The Local, referring to Sweden’s right to information act (offentlighetsprincipen). “Understanding these documents is one of the keys to journalism. I was also curious about how news travels."

Reflecting on Sweden's information laws and open access to certain types of public records, Eliasson decided to write an email to Kalmar municipality and test the rules “just for fun”.

"I have tried to get rid of Börje but unfortunately nobody wants the sweet little rodent,"  Eliasson wrote, posing as hamster owner Bo-Göran in the email. "Then the thought hit me that if I give him to you, he can be registered (as a public record) and then he can make many people happy."

Municipality officials refused, however, saying that a hamster could not be a public record – and Börje would not become a municipality hamster. The humorous story reached local media and then spread across Sweden via TT's quick summary of local news reports.

Eliasson marveled at how news of Börje spread like wildfire across news sites and social media. Suddenly, it seemed, Sweden was talking about Börje.

But the budding  journalist was even more surprised when only five journalists – and no one from TT – actually tried to track down the original source and speak with mythical owner Bo-Göran Sunesson, even though his email address was readily available.

So on Wednesday, Eliasson went public and let the media know: There is no hamster.

“At first I was just surprised that the story became this big,” Eliasson, who is in his final year of studies at Linné Univesity in Kalmar, told The Local. “And then I became confused, and then almost frustrated that no more than five people tried to find the original source. I was very surprised.”

Eliasson believes the story’s popularity was thanks to the way it tickled Swedish readers – probably in a way that it wouldn’t have if it had been about a dog or a more generic animal.

“I don’t know why I chose a hamster, it just felt right," Eliasson mused. "Maybe because it’s so specific, a gold hamster. But it’s a funny story, and (media) want to get hits on their webpages. It’s funny news stories that gets clicks. The hamster adds something, though; I can’t understand what.”

But the desire for clicks can be dangerous, and Eliasson said the most important thing he learned from the little experiment was to always go back to the original source.

“It’s not just a Swedish problem, but a problem with media in general,” Eliasson said. “As a journalist you are stressed, and you have to produce a lot in a short amount of time. You might not always find that you have the time to check everything, so you start trusting other media. And that is the centre of the problem. As it’s called in the scientific world, it’s cannibalization…you take someone else’s story and make it your own, so to speak. You trust the other media too much.”

At any rate, Eliasson achieved his goal of learning about public records and Swedish media, and the project turned out to be both entertaining and educational. But Eliasson isn't quite sure he's ready to put Börje to rest.

“I have actually gotten quite attached to this hamster that everybody finds so interesting,” Eliasson laughed. “So I’ve thought about getting a hamster. He would definitely be called Börje. And I wouldn't give him up, there’s no way he’d be sitting in an archive.”