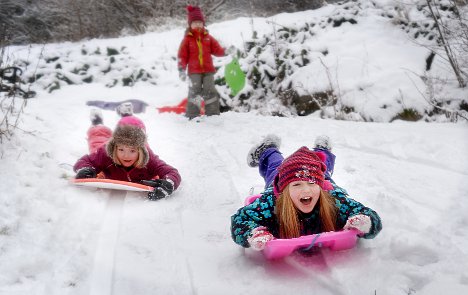 Children enjoy the snow in Sweden. Photo: Jessica Gow/TT
The storm is on the way from the south, and promises between five and 15 centimetres of snow.
"It will move in over the eastern parts of Götaland and Svealand during the day," Lisa Frost, meteorologist at SMHI, told the TT news agency.
SEE ALSO: Read the weather forecast for your corner of Sweden
"It will come in over Skåne and move north."
SMHI issued a class 1 weather warning for almost the entire east coast of Sweden up to Västernorrland, and for the majority of the waters of the Baltic Sea. A class 1 warning, the lowest on the agency's three-level system, means there are certain risks for the public and for damages to societal functions.
The agency added that there were risks of icy roads and strong winds creating snow drifts. The storm is expected to reach central Svealand region by the afternoon, and then will move to the Norrland coast by the evening.
The sun, however, is expected to show its face again early on the weekend.