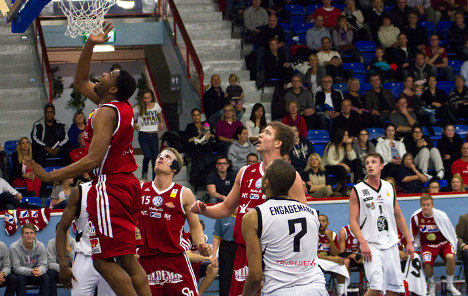 Wright,a 24-year-old Virginia native who played the last season with Polish team Czarni Słupsk, returned to Sweden earlier this month to play center for the Uppsala Basketball Team. He has played with Uppsala before, but this time around the Migration Board (Migrationsverket) has decided his contract needs changing. Specifically, paragraphs stipulating that he work with school children as part of the team’s social outreach programme must be removed.

"There was no problem last year, and that’s the problem," team manager Johannes Wohlert told The Local. "He had exactly the same contract last year, and was supposed to do the same things. But this year the Migration Board asked us to take away everything that had to do with him being involved in the social project."

Schysst Framtid (Super Future), a social project created by the Uppsala Basketball team in 2003, puts professional athletes in contact with school children in the outskirts of Uppsala. The basketball players, from both the men's and women's teams, act as positive role models for the kids, talking about things like bullying and drug use but also encouraging youth to engage in sports. All players with the Uppsala team are thus contractually obligated to spend several hours a week in schools working with children. Last year, when Wright played for the team on his previous contract, migration authorities didn't react.

"This is something I did last season, so I was a bit shocked. I didn't think it was such a big deal," Wright told Sveriges Television (SVT).

For non EU-citizens working with sports teams in Sweden, a special type of work permit applies. Athletes and coaches must engage in sports on a professional level and have a contract with an association belonging to the Swedish Sports Confederation. They must also have adequate health and accident insurance and earn a monthly salary of at least 14,300 kronor ($2,200) before taxes. If all these criteria are met, then getting the permit is usually quite simple – and approval only takes about a week, Wohlert said. But not this time.

“All of the work permits of this type that we grant are limited to work within the specified area," Migration Board spokeswoman Gunilla Wikström told Sveriges Radio (SR). "And in this case, we have determined that working with the project (Schysst Framtid) involves totally different work tasks than being an athlete.”

The Uppsala Basketball Team disagrees, publishing an op-ed earlier this week in the Expressen newspaper opposing the Migration Board's choice. The debate has since spread across to both traditional and social media sites.

“What they’re saying this time is that (Wright) can only play basketball on this permit, not do other work,” Wohlert told The Local. “We think that being in schools is part of his work and something athletes should do as role models. But the Migration Board interprets that as him doing other work than basketball, so they won’t give him a work permit unless he agrees not to do that.”

When contacted by The Local for an explanation why Wright's contract had been approved last year but not this year, Migration Board officials responded they were examining the details of the case but could not comment.

Wohlert told The Local it's unclear whether or not Wright can still participate at Uppsala's schools of his own volition as a volunteer, saying "we're not sure yet – and we're not sure they are sure either." The team hopes to engage in dialogue with the Migration Board and broaden the definition of what players are allowed to do.

“This is about a model of how we can use professional athletes out in society,” Wohlert said. “We want this to be one of the criteria for a professional player. Instead of them playing video games at home between practices, a few hours a week they are out in schools interacting with students. That’s how we want it to be.”

For now, Uppsala Basketball has removed the social project requirements from Wright's contract, and the player was granted a permit but is not active within schools – which Wohlert says is a loss for everybody.

“Keith has a major in psychology from Harvard University. He’s like the best role model ever, and he’s great with the kids,” Wohlert gushed. “That’s one of the reasons we recruited him. He’s great on-court, but he’s great off-court too."

Meanwhile the basketball player hopes to keep inspiring the kids, even if he can't work with them directly.

“There is more than one way to be a role model and help the kids,” Wright told The Local. “I can lead by example, on the street or the court. I just improvise and do what I am able to do when it comes to helping them.”