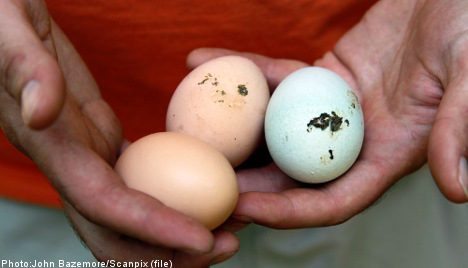 The verdict was handed down at the Ångermanland district court in northern Sweden where the 47-year-old was found guilty of hunting and aggravated species protection offences.

During one sweep of the man's home an estimated 2000 eggs were found in a secret room.

Police revealed that up to 15,000 eggs were seized in different places across the country. A total of three men appeared in court in connection with the egg thefts, with the prosecution arguing for a two year sentence for the 47-year-old who was considered the ringleader.

Following the 23-day trial the man was sentenced to a year behind bars, while the two other defendants were hit with probation charges.

The 47-year-old did not appear in court due to ill health but his lawyer said he understood that he will be convicted after entering a probation plea.

Police have been working on cracking the case since 2010 which has involved eggs from kestrels, red throated divers and red backed shrikes being plundered from nests.

The case also involved the British police after a raid in Scotland revealed that a person, who was selling rare bird's eggs, had some email correspondence with one of the defendants.

Prosecutor Stig Andersson told local newspaper Allehanda.se; "We have not been able to show that they earned money by selling or supplying eggs," he said.