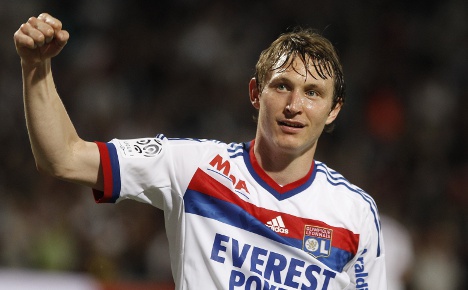 Kim Källström celebrates with French side Lyon in May 2011.

On Friday, the Premier League club snapped up the Sweden midfielder on loan until the end of the season from Russian club Spartak Moscow. But within a day of the news, it emerged that Källström would be out for several weeks due to a back injury, causing many observers to question the move.

Speaking to reporters following Arsenal's 2-0 victory of Crystal Palace on Sunday, Wenger explained that the team was forced to make a move for the Swedish international as the transfer window was closing.

"I would not have signed him if we'd had two or three more days to do something. It was Friday night at five o'clock. It was then or you get nobody," he said, adding that the team was aware Källström was injured.

But a scan had failed to show the extent of the injury and that he had a small crack in his vertebrae, which will keep him out of action for around six weeks.

Källström is on loan from Spartak Moscow and Wenger said that the Russian club will pay the Swede's wages for the first six weeks of his stay in north London.

He added: "On normal scans you don't find out but he might play before, he might play later. We identified four to six weeks, they pay the first six weeks wages.

"If we were going to do it, it was under these conditions so I decided to do it because we might, because of the number of games we now have in February, need the players in March or in April.

Wenger made the move in hopes of adding depth to a midfield hit by injuries to Aaron Ramsey and Jack Wilshere and Mathieu Flamini's suspension.

The 31-year-old Källström, who has also played for BK Häcken, Djurgården and Rennes, has a wealth of experience at the highest level after starring at French club Lyon.

The Swede made over 200 appearances for Lyon, winning the Ligue 1 title twice and helping the club reach the Champions League semi-finals in 2009-10.