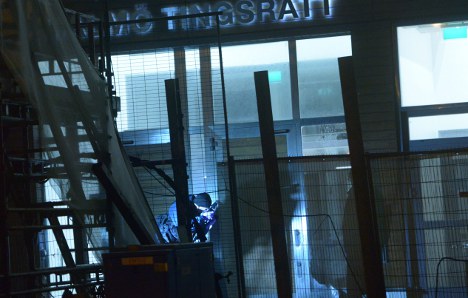 The scene outside the courthouse following the blast. Photo: Johan Nilsson/TT

The blast occurred around 3am at the entrance to a justice centre housing a new wing of the Malmö District Court. No one was injured in the explosion.

Skåne County police spokesman Hans Nilsson told the TT news agency that no known threats had been made against the justice centre, which includes secure hearing rooms and a remand centre.

"We don't have any concrete threats, but we  have active operations targeting criminal networks through the Olivia project," he said.

Launched at the start of the year, Operation Olivia  is an effort to combat organized crime and increase safety in Sweden's third-largest city.

The justice centre also houses offices for the police, the Prosecution Authority (Åklagarmyndigheten) and the Economic Crime Authority (Ekobrottsmyndigheten).

The area has been cordoned off while a forensic investigation is carried out.

The explosion has been classified as a case of public devestation (allmänfarlig ödeläggelse).