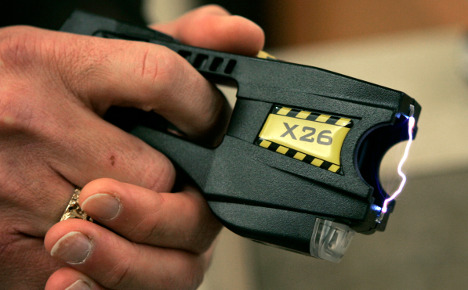 A file image of an electroshock weapon. Photo: AP

According to the indictment, filed on Tuesday at the Uddevall District Court in Gothenburg, the attack proved fatal for the woman's husband in part because he suffered from heart disease.

Prosecutor Stefan Lind claims the woman murdered her husband by repeatedly hitting him in the chest and head, while at the same time firing four shots at his face and upper body with an electroshock weapon, causing a heart attack.

The woman has been charged with murder and attempted murder.

"My client denies all accusations," the the 72-year-old's lawyer, Björn Hurtig, told the TT news agency.

Hurtig added that his client claims instead that it was she who was the victim of a violent attack from her husband.

"There had been an exchange of blows between the two, but she didn't murder him. He was alive when she left the scene," the lawyer explained.

The electroshock gun that prosecutors claim was used as the murder weapon was taken to the scene by the man and not by the woman.

During questioning, the man's daughter from a previous relationship told investigators that her father had felt threatened by his wife prior to the killing.

The 72-year-old widow, who has been held on remand since October 2013, once admitted to the killing during a call-in radio programme recorded in 1997.

"She made it sound like she had killed him, but didn't get into specifics," detective Mats Antonsson of the Gothenburg police's cold-case unit, told TT.

"But it was never broadcast."

The confession took place a couple of years after the husband had been found dead. Police at first launched an investigation into his death, but the probe was later dropped.

However, in 2012, the cold-case unit took a fresh look at the case, with the new investigation leading to the filing of formal criminal charges against the woman, 18 years after her husband's body was found near his home in Strömstad on Sweden's west coast.

Defence lawyer Hurtig doesn't deny that his client called Sveriges Radio (SR) call-in programme Karlavagnen in 1997 and discussed the death of her husband.

"She expressed something that one could interpret as a confession, but I claim that it falls short of a full confession. It wasn't recorded, so it's an interpretation," he told TT.

Prosecutors, however, believe there was a clear motive behind the killing, as the man wanted a divorce, which would have forced the woman to give up access to a country house which was "dear to her heart".

"It's very much about the fact that she wouldn't have been able to live the life she had been used to living," he told the Expressen newspaper.