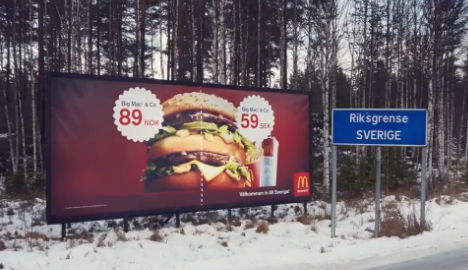 The billboard at the border near Buskerud - DDB Stockholm
The poster, designed by McDonald's advertising agency DDB in Stockholm, stands astride the border at Bergerud, one of the main crossing points between Oslo and Stockholm.
It points out that whereas a Big Mac meal costs the equivalent of 93 Swedish kronor ($14.3) in Norway, it costs just 59 Swedish kronor, making it more than a third cheaper on the eastern side of the border. In fact, Norwegian Big Macs are the most expensive in the world, while Sweden's are the fourth.
IN PICTURES: See the ten foods that are most searched for on Google in Sweden
"We Swedes quite happily welcome our bargain-hunting neighbours, with open arms and a broad smile," the commentary to a web video accompanying the billboard explained.
"In McDonald's case we did it with a billboard which itself crossed the border and which welcomed everyone to Sweden: half the billboard stood on Norwegian soil, the other half on Swedish, where the same product is a little more affordable."
SEE ALSO: KFC's 'finger-lickin'-good' chicken heads to Sweden
This story first appeared in The Local Norway