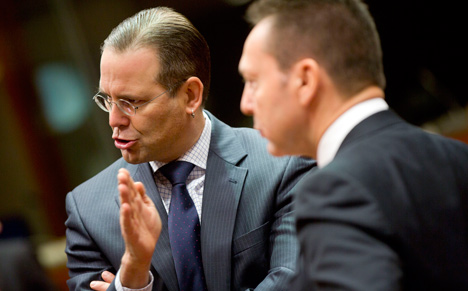 Borg told reporters on Thursday that the banks' continued high profits showed that they were "not mature enough to take their responsibility".

“It’s a bit surprising that one chooses to go with larger dividends in a situation where we clearly have signaled that the banks need to have large core capital,” he told the media in Stockholm.

"It doesn't appear as though the banks have listened to the signals we've sent them," he added. "Therefore, the conclusion is that we have good reason to tighten regulations."

Borg said he would take the matter up in the near future in meetings with the Swedish Financial Supervisory Authority (Finansinspektionen – FI) and the central Riksbank bank.

"(We will) decide how high our demands should be, what instruments we should use, and at what pace," said Borg, who believes the banks jeopardize the country's financial stability.

"What the banks are practically saying is that they are not adult when it comes to taking a societal responsibility in these questions," he explained. "Which means we cannot take them seriously when they say they will deal with this themselves."

“We have to look after the interest of taxpayers,” Borg told Bloomberg. “We have a large banking sector, which constitutes a risk for the Swedish economy and Swedish taxpayers.”