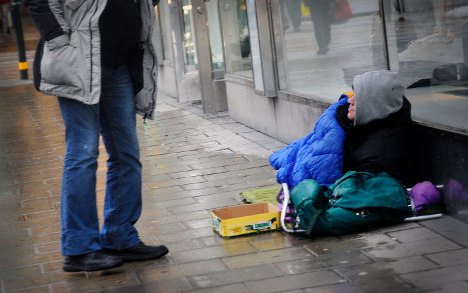 Photo: TT
That it is permitted to beg in Sweden "does not facilitate Romania's efforts to achieve social inclusion and increased employability," Raduta Matache,  Romania's ambassador to Sweden, wrote in a debate article in the Dagens Nyheter daily on Saturday.
Matache also highlighted the need for greater cooperation between both countries' authorities, and various NGOs. She furthermore suggested an expansion of cooperation between police forces in Sweden and Romania.
The Local reported a few weeks ago that two prominent Liberal Party politicians had admonished certain EU countries for not taking care of their poorest citizens, calling on Romania to foot the bill for its citizens who travel to Sweden to beg.
"It's time for the bill to end up where it belongs," Stockholm city hall politician Lotta Edholm and MEP candidate Erik Scheller wrote in an op-ed article in January.
"Stockholm is no longer composed of the inner city and the suburb, but the inner city, suburbs, and slums,"  "The chill behind walls made of plastic bags, melted snow instead of running water, and plastic buckets for the waste appears to be an intolerable life to all of us who have a roof over our heads and warm water in the taps."

Edholm and Scheller said, however, that the realization that such shanty towns on the edges of Stockholm were preferable to life in the residents' home countries was the most shocking.

The Sweden Democrats have previously called for outlawing begging by foreign citizens in Sweden, arguing in their party programme that they are "professional beggars".

The Romanian Health Minister Eugen Nicolaescu is due to visit Sweden in March to discuss the issue.