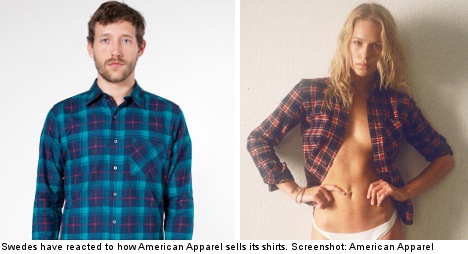 "CONGRATULATIONS, AMERICAN APPAREL! You got 35 percent – nearly 10 000 votes – of the 27,901 votes received during the week," Swedish gender studies lecturer Tomas Gunnarsson, aka the Gender Photographer (genusfotografen), wrote on his blog on Friday.

Gunnarsson's campaign was launched by listing a series of nominees on his blog on Sunday, with over 200,000 visitors subsequently taking notice.

The blog entry offered readers a chance to vote for whom they think has been the worst example of blatant sexism and thus rightful recipient of the "Sexist of the Year 2013" title complete a mug in the shape of a golden breast (Guldtuttmuggen in Swedish).

Gunnarsson posted the results on his blog on Friday and revealed that he planned to hold an impromptu awards ceremony at American Apparel's outlet on Götgatan in central Stockholm on Saturday afternoon.

"That's the worst one. If you look at the images, the women have nothing on them besides the shirt. They're walking around an empty apartment with a polo stick while the man stands there looking cool, slightly sedated, upright, not pleasing the viewer, it's the perfect example of the male gaze," Tomas Gunnarsson told The Local last week.
He claimed that the images remind him of child porn, and added when he once showed the pictures in a lecture, people working with the rehabilitation of sexual abuse victims almost jumped out of their chairs.
This view was shared by a number of those who backed the firm's nomination for the award.
"Their vile paedophile images are so elaborately heinous that they are unbeatable," wrote 50-year-old Magnus.
The TT news agency claimed the runner up spot for erecting a Nicki Minaj "breast wall", while other nominees included a topless woman used on the homepage of a high-end Stockholm eatery and Anders Vendel, a chef whose Facebook page featured nearly naked women cooking in the kitchen.
Gunnarsson explained the campaign as an attempt to encourage analysis and the development of an academic perspective.
"These scandals blow over very quickly and there isn't much analysis," he explained. "I haven't seen anyone actually comparing these kinds of pictures and looking for a connection, or giving an academic perspective. There have been a lot of sexism scandals in Sweden and I don't know if we're getting more allergic to sexism or if there is some kind of a backlash going on."
The Local's attempts to obtain a response from American Apparel's managers in Sweden were unsuccessful on Saturday morning.